Make an impact with your power point or keynote audience with a large hologram for a keynote speeches. Your charts, graphs and other powerpoint content can be projected on stage as a large 3D Hologram. Trade Show Holograms offers this stunning 3D presentation effect to clients looking to be remembered for their presentation or speech.

The large hologram projector gives you at the ability to show your product from a 360 degree view on stage. You can beam in a CEO or guest speaker via teleconference. Special effects can be added for a high tech futuristic look.

Todays keynote audiences have witnessed holograms in films like Star Wars or the Iron Man movies. The 3D hologram projector system used for our keynote presentations creates the same type of 3D effect. Your audience will see holograms live on stage in front of their eyes. No special 3D glasses are needed to create this stunning effect.

They won’t see Princess Leia from Star Wars but they can see your CEO, special guest or expert on stage in holographic form. Data charts and info that would be a boring standards in 2D on a flat screen take on a new life in 3D hologram form.

The creative staff at Trade Show Holograms can easily take your 2D powerpoint presentation and convert each page to a 3D holographic presentation. As us for more information on this exciting and creative way to present your next keynote speech.

A 3D holographic projection can be created using various technologies. “Its really a matter of the size of projection you require and the environment in which you wish to project it in.” says Timothy Drake, CEO of Trade Show Holograms. Trade show holograms has established itself as a leader of 3D hologram technology for the corporate trade show market. The dual sided interactive kiosks they developed are unsurpassed for their hologram clarity, resolution and brightness. They now offer large scale hologram projections.

Sometimes however a client wants a life sized hologram projection or maybe even something of a more large scale projection. This is often the case in theatre productions or large scale corporate events were a keynote speaker wishes to add a holographic effect to their presentation.

Recently a theatre company in the Bahamas ( Performing Spaces ) called upon Trade Show Holograms to create large scale holographic projections for Jonathans World, a play recently produced by the company.

Among the many holograms created was a large scale projection of a shark swimming above the stage. The audience witnessed the shark swimming from the back of the stage towards them.

The company offers large scale hologram projections up to 20 tall and 40 ft wide for clients wishing to go big or go home. In the age of corporate telepresence, holographic projection has become a popular medium for presenters to make an impact on audience members. Trade Show Holograms has now expanded into the large scale hologram market around the world.

When it comes to holograms some people feel that you have to go big or go home. A 3D object floating in the air is a pretty cool looking effect no matter the size but keynote speaker Wade Barnes decided to go for maximum impact during a recent presentation entitled BIG DATA at the 2015 Farm Tech Conference.

The 45 minute presentation focused on the uses of big data in the future of agriculture world wide. Issues such as global warming, weather changes, food demand, population growth and future technologies were included. A large 3D hologram projector system was used to present the keynote in a high tech delivery.

The keynote audience was treated to a show featuring 3D objects floating in mid air enhanced by sound effects. The presentation was opened with an appearance from FIONA, a holographic robot who beamed in for the occasion. Holograms have become an exciting option for keynote or power point presentations as their popularity has increased in movies such as the iron man series and the star wars films.

When your keynote speech is about future technology it helps to make that point with a futuristic presentation media. Wade Barnes of Farmers Edge presented a keynote speech on BIG DATA and the future of the agriculture business. He enlisted the help of a large scale 3D hologram projector to present his message in both an informative and entertaining way.  The audience was treated to stunning 3D visuals up to 8 ft high and 15 ft wide which appeared to float in mid air, enhanced by sound effects. The projection systems are a product of Trade Show Holograms, a company that has specialized in 3D projection across North America for 8 years.  With the appearance of holograms in hollywood films such as Star Wars and the Iron Man series audiences are thrill to see the effect happen in 3D before their own eyes and not on a movie screen. This presentation was part of a keynote at the 2015 Farm Tech held in Edmonton Alberta Canada. 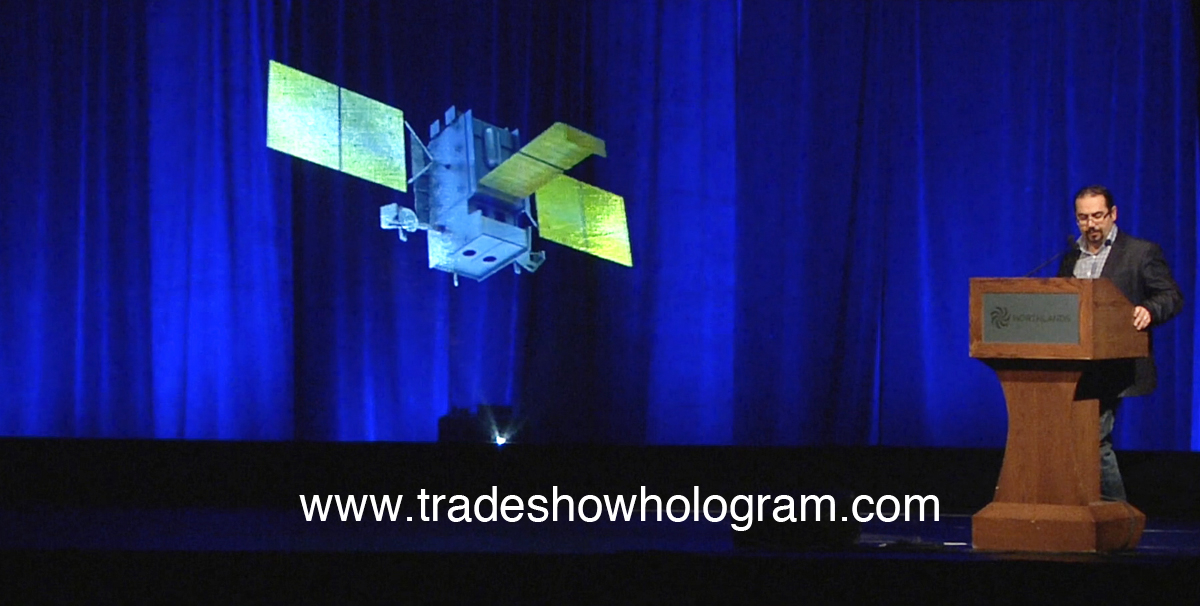 On January 27th, 2015 Farmers Edge CEO Wade Barnes presented a futuristic look at how BIG DATA is important to the agriculture industry. The keynote speaker presented a 3D holographic presentation as part of his keynote speech. The event started off with a welcome from FIONA who invited viewers to be amazed.

The video below shows segments from the event.

Dr. Partho Sengupta wowed the crowd at the ASE Scientific Sessions by presenting his Keynote speech with a large scale 3D hologram projector.

The holographic presentation included images up to 8 ft tall and 15 ft wide floating in the air beside him as he interacted with them. At one point Dr. Sengupta beamed in a colleague and mentor via a holographic teleconference to joint him on stage.

This talk also featured a 3D Power Point presentation in hologram form. The presentation was rewarded by the conferences first ever standing ovation. 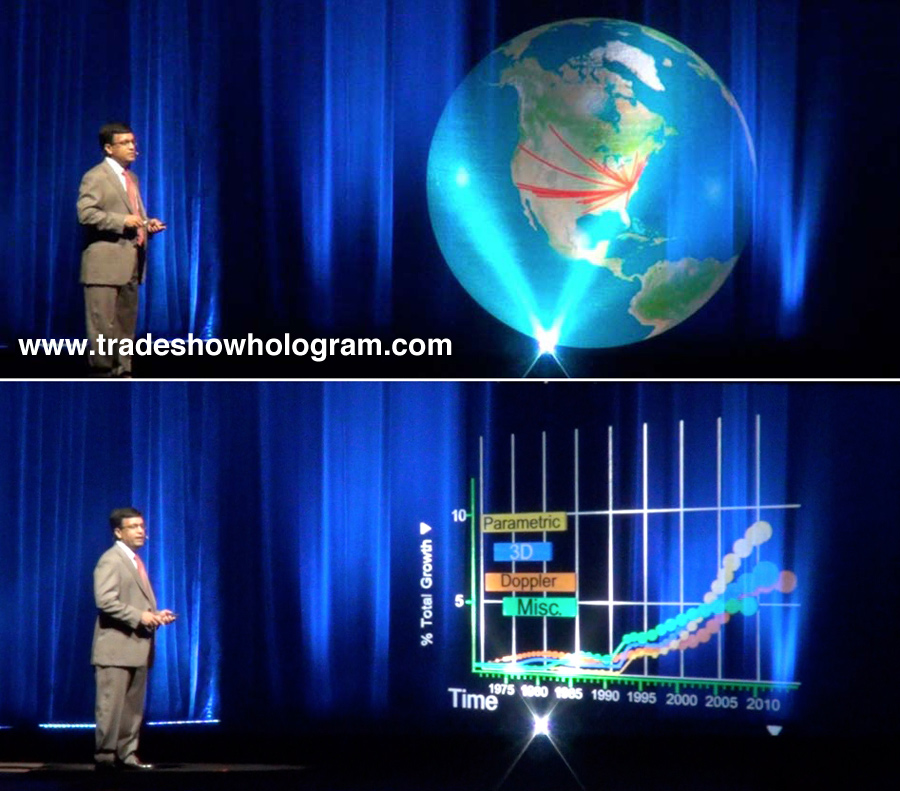 No its not Princess Leia of Star Wars fame but rather a life sized 3d holographic virtual presenter speaking via teleconference at the ASE 2013 conference in Minneapolis MN.

Dr. Partho Sengupta is seen here speaking with a holographic version of his mentor Jim Seward to discuss the future of high tech computers in the medical profession.

Trade Show Holograms, a company that develops both large and small holographic presentations in North America created the special presentation in a way that it could be viewed in 3d without the use of any special 3d glasses. The company offers a series of holographic projectors for both sale and rental in the USA and Canada.

Virtual Presenter appears on stage as a 3d holographic avatar.

On July 1, 2013 Dr. Partho Sengupta presented a lecture at the ASE Scientific Sessions conference in Minneapolis MN. Partho had been working with Trade Show Holograms for some time to help him in presenting his message of utilizing modern technology in the health and medical industry. His plan was to use a 3d holographic presentation to demonstrate some of this technology. The presentation included large scale animated holograms floating in mid air beside him.

The doctor gave a very detailed lecture aided by floating holographic powerpoint presentation and even a special visit from a professional mentor in the from of a life sized hologram. The very unique presentation helped earn the doctor a standing ovation from the much impressed crowd.