July 20th, 2019 will mark the 50th anniversary of the Apollo 11 Moon Landing Mission. NASA is celebrating the date with the addition of Apollo 11 Holographic Displays.

Guests at Florida’s Kennedy Space Center can help celebrate the Apollo Anniversary with 2 interactive hologram projectors. Visitors can learn interesting facts about the various Apollo missions via interactive touch screens. Did you know the Lunar Module almost ran out of fuel during its critical last minute of landing? What is the BBQ roll and why did they need to do that? Did you know about the Launch Abort System that was part of the Saturn V rocket? How did later Apollo Missions take a dune buggy to the moon? These are some of the topics presented in 3D holographic form.

The 3D exhibits were designed and built by Trade Show Holograms, a company specializing in holographic effects for the trade show booth industry and normally offer them as rentals. The displays are proving popular with guests visiting the Kennedy Space Center in Titusville, FL. The combination of the 3D projection floating in mid air, the informative narrative and the surprising Apollo Mission trivia guests can use modern technology to learn about the Apollo missions.

With the famous moon missions happening 50 years ago, the public may think they have learned all there is to know about the project and pass by standard type museum exhibits. The opportunity for museum visitors to interact with the Hologram projector and see Apollo mission facts and trivia presented in a 3D hologram format is something many guests won’t pass up. The displays have proven very popular at the Space Center with visitors of all ages. The 3D effect is something you have to see in person to really appreciate.

In the crowded atmosphere of a busy trade show each exhibitor has to compete to attract attention to their booth with something unique. A 3D Hologram Projector is an excellent way to do just that. Holographic projections are an eye catching way to present a product or sales message. Holographic images appear to float in mid air, vanish , morph into something else or show off highlighted features of the product.

The fully animated presentation features a wide range of colors and an audio track if desired. Trade Show Holograms has been creating and deploying a wide range of hologram projectors since 2006. Holograms range from a standard size designed for the average trade show booth exhibit to large sized holograms where the holographic projection can reach 20 ft wide.  Holograms can be purchased or rented by trade show exhibitors looking to attract traffic and stand out in a crowded marketing environment. 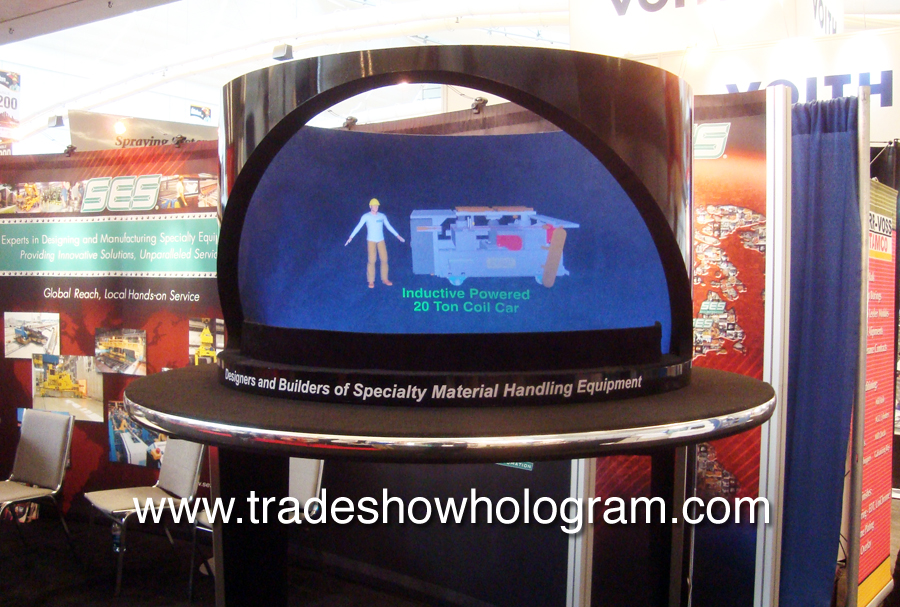